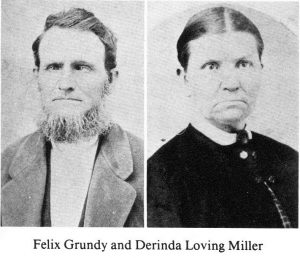 According to family lore, Felix & Derinda eloped due to the fact that her parents did not approve of Felix.  Later, along with several other families, Felix and a pregnant (with Prior J.) Derinda, and their children, William Lewis and infant Louisa  came to Texas in 1845 (or 1844) on one or more flatboats down the Mississippi River to New Orleans, then by the Red River to the Sulphur River as far as present Titus County then on to the present Delta County area traveling by wagon.

They settled in the area around Shiloh (then Hopkins County) more than 20 years before Delta County was formed.  Charleston and Ben Franklin were the trade centers nearby and Jefferson was the largest city in the region.  The countryside was full of timber, wild game and even Indians .  These were true pioneer times in this area, as Texas was still an independent Republic seeking statehood.