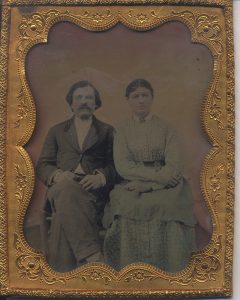 William Lewis was born on October 12, 1841 to Felix Grundy and Derinda Loving Miller in Hopkins County, KY.   He came with his parents to Texas in 1945.   At the age of 20 when the Civil War began he enlisted in Company B, Ragsdale’s, Texas Calvary, CSA.  William fought in the Battle of Shiloh, TN and Corinth, MS.  After the war, in 1865, Miller married Nancy Jane Moore Robinson, born on October 17, 1842 from Alabama.  She had been previously married to a Mr. Robinson.  The family farmed at Needmore, where William became known for his faith and attention to building and guiding the Baptist Church there.  Nancy was married previously to a Mr. Robinson.

They had 5 children, one of whom is our direct ancestor…Andrew Pratt.