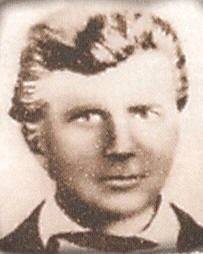 Oliver Loving, son of John and Susan Bolling Loving, Hopkins County, KY, on December 4, 1812.  In 1833 he married Susan Morgan who was three years his senior.  In 1845, with his wife, their five children, and other members of his household, Oliver left their home in Kentucky to come to Texas.   The year before, his sister Derinda, who had married a fellow Kentuckian, Felix Grundy Miller, had left Kentucky with her husband and children for Texas.

They made the trip down the Mississippi on a flatboat  bringing along such household goods as they required.  Loving landed at Jefferson, TX in 1845 and made his way in ox-wagons to a point in Lamar County where his sister, Derinda and her family had homesteaded.  After a brief stay Loving and his family traveled on to Collin County arriving sometime in 1846 where he homesteaded a 640 acre tract of land.

While his family remained there for eight or nine years farming and raising stock, Loving gave no more time to these pursuits than to supervise his young sons and his slaves.  He spent much of his time away from home buying and selling cattle and horses and freighting with ox teams.

In 1855 Loving sold his land in Collin County and moved further west around Fort Belknap on the Brazos.  There he opened a country store and began to deal in cattle on a larger scale than before.   His interests lay more in buying, selling and marketing cattle than in raising them.  Most of the cattle in the area reached the outside markets through him.  He trailed them to Shreveport or New Orleans, which were the chief outlets for the cattle of South Texas.    Other men were trailing cattle to these markets over safer routes, but it was Loving  who pioneered the more daring custom of sending herds over the long dangerous stretched of Indian-infested territory to the northern and western markets.

In 1858 he and John Durkee pointed the first herd toward the north.  They beat out with their herds new trails that thousands of longhorns were to follow for the next three or four decades.  In 1860 with John Dawson as his partner and guide, he set out with a thousand steers to Denver, Colorado.  At that time, the Civil War began and the US government refused to let him return to Texas.   Thanks to his friends Kit Carson and others, Oliver was able to obtain his release.  He arrived home late in the summer of 1861 where he did serve the Confederacy, but not on the firing line.  Loving held a contract with the Confederate government to deliver beef to its troops.

After the war, Loving became closely associated with Charles Goodnight, and the famous partnership of Goodnight & Loving came into being.  Goodnight was twenty-five years younger than Loving and his youthful enthusiasm  balanced admirably with the years of experience of the older man.  In June, 1866, the two men set out with eighteen cowhands and two thousand to beat out the trail that would be known as the Goodnight-Loving Trail.  They made the 600 miles without seeing a single Indian.

Over the next few years, several more cattle drives ensued.   In 1867,  they set out on another drive.  This time, however, the Indians gave them a lot of trouble, stampeding their cattle and wounding one of their hands.  Later the Indians attacked again and took some 60 heads of their cattle.  Not strong enough to retake the cattle they kept going, taking a higher ground for the next 200 miles saw no more signs of Indians.   Oliver became restless to hurry on to Santa Fe as their government contract expired in July.  Goodnight tried to persuade him not to go but Loving insisted promising to travel only at night, hiding and resting during the day.  He also took with him a good man, Bill Wilson.  After traveling two nights and seeing no signs of Indians, he decided to resume day traveling.  That next day, near the east end of the Guadalupe Mountains they spotted a large body of Indians charging them from the southwest.  They were soon surrounded, but held them off until nearly sundown when the Indians ask for a parley.  Wilson understood Spanish, which the Indians spoke,  so he volunteered to go.  Loving was to keep watch and to protect him.  The Indians fired at Oliver from a shelter below and inflicted a bad wound which he thought was fatal.   At this point both men retreated and held them off until dawn.  He then insisted that Wilson make an effort to leave, which he did eventually hooking up with Goodnight.  After searching for Loving, then believing him dead they went on to Fort Sumner without mishap.  After two days of hiding, Loving left traveling upstream where the heard was watering hoping someone would pick him up.  He lay there for three days, severely wounded with nothing to eat.  Finally several Mexicans on their way to Texas came across him.   After being given water and food by these men, he hired them to take him back to Fort Sumner about 150 miles a way.  Fifty miles out of the Fort, the party met up with a fellow trail driver who took over, dressing his wounds and then taking Loving back to Fort Sumner where he began to recover.  Unfortunately, the wound was not healing properly, becoming poisoned from long neglect by a young, inexperienced doctor, and an amputation was  necessary.   After the surgery, the arteries began to leak requiring another surgery to re-tie them.  After this surgery, Loving began to sink from that time on.  He died on September 27, 1867.

He was originally buried at Fort Sumner, but in October Goodnight returned from Colorado and took his body some 600 miles back to Weatherford, Texas where his family now lived and where he resides today.