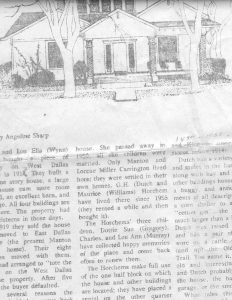 In 1912, A.P. and Louella Miller bought a piece of property the size of one-half of a block, on W. Dallas Avenue. They built a one story house a large smokehouse a barn and a garage.  The property also had three cisterns in those days.  In 1919 they sold the house and moved to East Dallas Avenue (the site of the present Manton Miller house).  They had arranged to “tote the note” on the  West Dallas Avenue property, but after five years the buyer defaulted.

For several reasons the Millers decided to move back to the West Dallas Avenue home. By this time, the property had been connected to the sewer  (East Dallas Avenue had not) and the streets were in much better condition.

Mr. Miller added the “airplane” room (with sixteen windows) as a second story.   there were strange and exciting hidey holes and storage rooms upstairs also.  The lumber and workmanship available in the first quarter of the century were of the finest quality.  The enclosed beams in the attic looked “finished”; the whole place was sound and sturdy.

A.P. Miller died in 1925 leaving five of his eight children under the age of fifteen to grow up without him;  Pete, Manton, Elaine, Edwina and Ann.  They were raised in that house by their Mother, Louella and older sister Lorene.  Mrs. Miller died there in 1950.  By then all of the children, were out on their own and only Manton and Lorene still lived in Cooper.  It was later sold to Dutch Horchem and they made full use of the of the house and other buildings.

What tales this wonderful old house could tell of the “heap of livin” it takes to make a house a home.