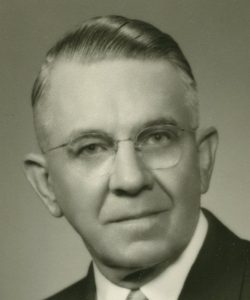 The oldest of eleven children born to A.P. and Louella Miller on July 2, 1897 in Yowell, Texas.

He graduated from Cooper High School and attended Baylor University one year before W.W.I began.  Greaver worked in the automotive industry before enlisting in the Army’s Signal Officers’ Reserve Corps at the age of 20.  His term of enlistment lasted five years.  Miller’s dream of becoming a pilot required extensive study.  He  graduated from the U.S. School of Military Aeronautics at the University of Texas-Austin on July 13, 1918.  From there Miller moved to Rich Field in Waco, Texas, where he excelled at putting the newly-learned theories into practice.  Upon passing his pilot examinations, Miller was commissioned as a “Reserve Military Aviator” on December 13, 1918.  He was promoted to the rank of Second Lieutenant on February 1, 1919.

Hooten Drug Co. hired him in 1921, and he enrolled in the Danforth School of Pharmacy in Little Rock, Arkansas.  The next year, after graduating, he worked for Butcher Drug in Clarksville, TX.  In 1923, his father financed Greaver’s half of a partnership with Floyd Lane to buy North Side Pharmacy in Cooper from Sam Morgan and Charles Pratt.  Greaver later bought Lane’s half.  The Grand Theater next door to Side North Pharmacy had a brilliant neon sign made for his store.  So, Greaver had a drugstore sign of neon made for his store.  The sign was moved when Greaver moved his store to the southeast corner after purchasing the Farmer’s National Bank building from Cleveland Ratliff.  The sign is still prominently lighted with neon today.  Greaver moved the drugstore and the “Upstairs Doctors” to the new location in 1930, and changed the name to Miller’s Pharmacy.

In1934, Greaver married Laura Novella Morgan who had moved here as a home demonstration agent.  In 1936, Gerald Lewis Miller born and in 1938, James Charles Miller was born.  Greaver owned Miller’s 1945 when he sold his store to his brother, Manton, who had worked for him since he was a young boy, and had learned the business.  Greaver explored other interests, but still worked as a pharmacist.  He bought and sold a car dealership in Carthage, Texas before moving to Dallas to retire.  He worker part-time as a pharmacist even then.  He died in 1968, Laura in 1969.  They were members of First Baptist church.

Jerry and Jimmy grew up behind the soda fountain at Miller’s.

This is a collection of information and media gathering the history of the Miller family which flourished in Cooper Texas.